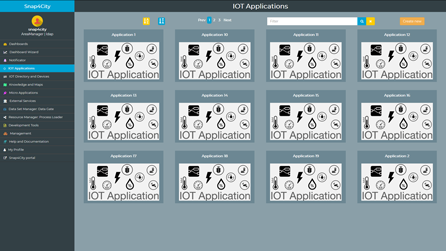 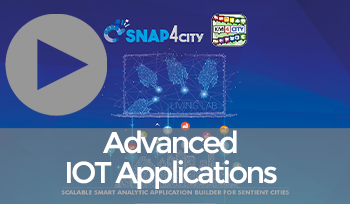 click the image to access the tool and create new IOT Applications, see the video   (thw IOT applications are accessible only for registered users)

The Snap4City Applications are data driven processes, personalized or shared among a community in which data are processed, and may be periodic and batch processes as well. They present a user-friendly interface (for creating applications, that may ingest data, elaborate them and presenting results).The creation of IOT Applications is supported by a visual tool. Typically, one arrive at producing and IOT application once he/she succeded in viewwing and creating some dashboard. The Dashboard can be regarded as the user interface of the IOT application. Or the opposite, the IOT application can be regarded as the logic behind a Dashbaord. In other IOT tools, IOT applications are formalized by using rules based, while in some cases with coding and flows. Here in Snap4City you can produce very powerful data flows for real time data driven appications, and end-to-end secure connection.