Snap4City platform consists of a set of 100% open source, modular and integrated tools accessible according to the user profile. A technical version of the Snap4City architecture is reported in the next figures, where the main elements are reported and described below.

From Left to right of the above figure.

Data Ingestion and aggregation is performed in push/pull by using: IoT Connectors, IoT Agent, IoT Adapter, IoT Broker, IoT Apps in Node-RED, and data gathering tools as DataGate/CKAN for open data (https://ckan.org ), ArcGIS, and Portia for Web Scraping. The Snap4City platform supports a very large number of protocols push/pull, sync/async among them: MQTT, NGSI, COAP, OneM2M, ModBus, OPC, WMS, WFS, and AMQP. See for the list of the protocols supported Https://www.snap4city.org/65     Data Models, IoT Device Models, IoT Devices, and IoT Broker are registered via IoT Directory which is multiprotocol multibroker tool for IoT Network management. Among the brokers, a mayor role is played by IoT Orion Broker of FIWARE by which the platform support NGSI V1, V2, LD with Services/Tenant and Service Paths. And its elements as IoT Agents, etc. A detailed description of IOT capabilities and network are provided in: https://www.snap4city.org/download/video/course2020/sys/ while a large number of detail regarding the data ingestion are reported in https://www.snap4city.org/download/video/course2020/di/

Data Storage is feed by using NIFI Cluster for massive data aggregation/enrichment (collecting data from any IoT Broker at which it is automatically registered), and saving data to Elastic Search cluster for data storage and indexing, and to the Knowledge Base (based on Km4City ontology) implemented as an RDF store (Virtuoso) which is an index for geo-spatial, relational, and temporal aspects. Every time a new data model is registered in the system, the registration is performed into the Knowledge Base. Knowledge base and Smart City API can be federated creating a mutual connection among friend cities. In the Snap4City Platform, (i) Heatmaps, Orthomaps and Maps are managed by the Heatmap Server which is a GIS (for example GeoServer or ArcGIS if you have one installed with WMS facilities) and can distribute the maps according to WMS/WFS protocols towards Web and Mobiles App and Dashboards; (ii) Buildings 3D shapes, and Floors are managed and distributed into the OpenMAINT tool, standard BIM tools are used for editing and interchange in IFC formats by standard tools as AutoDesk Revit, etc. Buildings and Floors are shown in Dashboards for their integration with maps and IoT Devices time trends. Thus, creating a full Digital Twin model of any part of the city.  The tools for accessing to the Digital Twin is the so-called Data Inspector. Details can be obtained from: https://www.snap4city.org/download/video/course2020/di/

Data Transformations (reconciliation, regularization, enrichment, etc.) are implemented via IoT Apps (IoT Applications) which are processes for ingesting, integrating and manipulating data with PUSH/PULL protocols from any External Service and also from IoT Broker, and Virtual IoT Devices of any kind. IoT Apps are developed by using a visual programming data flow and/or data driven flows in Node-RED exploiting a large library of more than 150 Snap4City MicroServices.

They are also used for implementing user interface logic, Business Logic behind smart applications and Dashboards also in references of Custom Widgets and Synoptics, which can be very useful in Smart City Control Rooms. Please note that Data Transformation / Integrations may exploit internal and external storages from any kind database, any connectors from/to data sources, any External Service, any direct connection with IoT Devices and Networks, etc. A large number of details regarding the data ingestion are reported in https://www.snap4city.org/download/video/course2020/di/

Smart City APIs include a large collection of services to: exploit queries and reasoning on the storage and Knowledge Base, access/control IoT Network, exploit Data Analytic results, exploit IoT Apps, etc. All the data and services are accessible via the Smart City API which are used by Front End Tools such as Dashboards, Web and Mobile Apps, MicroApplications. Details regarding Smart City API are reported in: https://www.snap4city.org/download/video/course2020/app/ Knowledge base and Smart City API can be federated creating a mutual connection among friend cities.

Dashboards can be created by Dashboard Builder and/or Kibana for different kind of users such as: decision makers, city operators, ICT operators, private for the users, etc., suitable for Smart City Control Rooms with video wall, for city Operators on Desktop of multiple monitors, mobile operators, and Situation Rooms with touch panels. Dashboards can exploit all kind of data and Data Analytic, legacy services, and special tools as traffic flow reconstruction, decision support systems, etc. Dashboards area created by using a large range of ready to use Widgets, and also Custom Widgets creating Synoptics as SVG elements, or exploiting other graphic libraries, such as D3, Highcharts, etc. Examples on dashboard and how they can be authored are reported in https://www.snap4city.org/download/video/course2020/das/

Web and Mobile Applications can be created by developers exploiting Smart City APIs and may be controlled by Snap4City tools. For example, to send on the Mobile Apps: engagements, soundages, stimulus, and thus for monitoring user behaviour, creating origin destination matrices, getting reaction from the city users, informing user at the inception of critical conditions, etc. Details regarding Smart City API and their usage for the development of Web and Mobile Apps with related development environment are reported in: https://www.snap4city.org/download/video/course2020/das/

Snap4City platform can be installed in several different configurations exploiting the same modules. The different configurations may be suitable from small cities to large cities with a high number of users and huge volume of data. The different modules can be provided as VM (Virtual Machines) Appliances or Dockers. The different Snap4City configurations and each component mentioned in the following are described in detail with the instructions for their installation at page: https://www.snap4city.org/471 Please note that each VM is an appliance with a number of components which can be updated directly from GITHUB/DISIT. https://github.com/disit

DataCity-Large which is reported in the following figure, and it is mentioned quite similarly into Tutorial Part 6  https://www.snap4city.org/download/video/course2020/sys/

Snap4City platform can be installed in several different configurations exploiting the same modules. 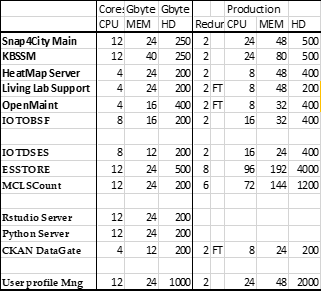 Where in the table the numbers are only indicative, and refer to a large deploy of the solution for a large city or for a group of small cities:

Brief Description of Each Platform Component

The data ingested as Data Models are registered on Knowledge Base. The registering the data model is the first step to enable the possibility of loading data instances which can be: Static, quasi static and dynamic real time data, as even driven processes and streams. The main component includes:

Snap4City can integrate any kind of IoT Broker which connect IoT Networks of IoT Devices.

IOTDSES: data ingestion process from Brokers to ES via NIFI

For the data analytic development, it is possible to access the Big Data store respecting the privacy and the data licensing by using authenticated Smart City APIs. The access has to permit to read historical and real time data, and to save the resulting data provided by the algorithms, for example, heatmap-related predictions, the assessment of data quality, and labels of detected anomalies. The work of the data scientist could finish once the algorithm has been developed which he/she should be aware of. On the other hand, the same algorithm (e.g., for computing heatmaps, parking prediction), should allow to be:

Therefore, the solution developed for Snap4City satisfies all the above described requirements. Data analytic processes can be developed using R Studio or Python. In both cases, the code has to include a library for creating a REST Call, namely: Plumber for R Studio and Flask for Python. In this manner, each process presents a specific API, which is accessible from an IoT Application as a MicroService, that is, a node of the above-mentioned Node-RED visual programming tool for data flow.

Data scientists can develop and debug/test the data analytic processes on Snap4City cloud environment since it is the only way to access at the Smart City API with the needed permissions. The source code can be shared among developers with the tool “Resource Manager”, that also allows the developers to perform queries and retrieve source code made available by other developers.

The user profiler module can receive data from mobile Apps via some API and produce the collective profiles which can be used for many purposes (not included) such as computing: recommendations, OD matrices, typical trajectories, hot places, etc.

Please note that the following table is divided in sections which correspond to the names/identifiers of the main components of the Snap4City platform offered and described in the previous sections, and also reported / referred in the official web page for installations of Snap4City: https://www.snap4city.org/471 .

5.2 – Needed Components not of Snap4City but needed

As described above we would remark the modules that are used in the proposed solution and are not maintained by Snap4City.