This is the second part of the tutorial that has the aim at training you in creating Snap4City SVG Custom widgets and to instantiate the Synoptic to be published into a Dashboard. The first part is available here: TC1.22a: Create and configure a Snap4City SVG Custom Widget for real-time interaction

Once the SVG file has been correctly created, it has to be uploaded on the platform as SVG template.

Please note that many different public templates are yet available on the the Snap4City platform and can be freely used. Otherwise, you can create your personal SVG template, as explianed before, and upload it on the platform and decide to make it public or not.

Upload a SVG template on Snap4City

Please note that to upload a new SVG custom widget you need to have at least the role AREA MANAGER. Users with role MANAGER cannot upload new SVG templates on the platform but can use public SVG templates.

After the Log In on the platform, on the main menu on the left, click on Extra Dashboard Widgets --> Register Custom Widget Template (1). As shown in the next image, the list of yet available SVG teamplates is shown as previews. As reported below each preview image, the SVG custom widget template shown can be: public SVG templates, SVG templates uploaded by you and delegated SVG templates. On the top right corner the "New Template" button (2) is available to upload a new SVG template.

To upload a new SVG custom widget template, click on the "New template" button on the top right corner of the page. A new page is opened to be filled with the followign information:

Once the SVG file has been selected and all mandatory fields have been filled, click the "Save" button (4).

Wait the confirmation message before to proceed. The new SVG is now available in the list of the Custom widget Templates.

In the page with the list of SVG Custom Widgets, below each widget preview a number of buttons are available. These buttons are different according to the template status (private/public template, if you are the owner or not, etc.). If you are the owner of the SVG Custom Template and it is private, you see 4 buttons below the preview, as in the following image: Edit - Management - Instantiate - Delete. 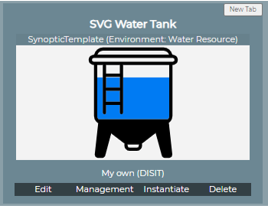 On the top right corner of each SVG custom widget template a small "New Tab" button is available. By clicking it, the corresponding SVG image is opened in a new tab in the browser.

The Edit button allows to edit the template i.e. to update the Nature and Subnature of it or to load a new version of a SVG template or to update the preview image. The Edit page appears as in the following image. Click Save to confirm the update and wait for the confirmation message before to proceed.

The Management button allows you to access to a number of tabs, as shown in the following image:

The Instantiate button allows you to create an instance of the SVG template to be used in your dashboards. To create a new instance of the template you have to specify a name of the specific instance. This page also shows all variables defined in the SVG template and, for each of them a dropdown list is shown that allows you to associate each single variable to a specific KPI.

Variables in the drop down list are sorted according to the following criteria:

Below the list of all KPIs in the dropdown list you find two addional items allowing to create a new shared variable to be associated to the template variable.

Also it is possible to set a static value to be defined immediately, as shown in the next image.

Click the "Save" button to create the SVG instance.

Please note that an SVG custom Widget Template can be also instantiated without specifying and selecting any variables from the dropdown lists, for example in the case you would interact with the SVG variables directly via an IOT App.

For additional information regarding the possible connection and interaction from Synoptic (read as SVG Custom Widgets) and the rest of the Snap4City infrastructure please, refer to this page: TC9.19: Custom Widgets / Synoptics controlled by IOT Applications.

All instantiated templates are available by clicking on the left column menu item Extra Dashboard Widgets --> Custom Widgets / Synoptics. This page shows all public instances, delegated instances by other users and clearly your own widgets/synoptics. 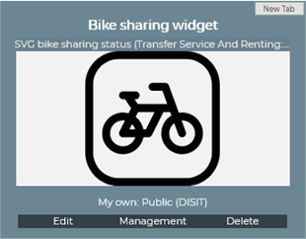 The Edit button allows to edit the custom widget/synoptic variable setting, as described above for the instantion of a SVG custom template.

The Management button allows you to access to a number of tabs, as shown in the following image:

How to use a Snap4City SVG Custom Widget

Now on the Snap4City platform it is necessary to define the new MyKPI, according to the new defined attributes in the SVG file. So that, we need to create the following new three KPI:

To create the new three KPIs, follow this steps: 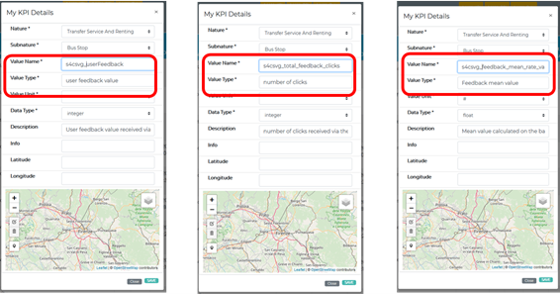 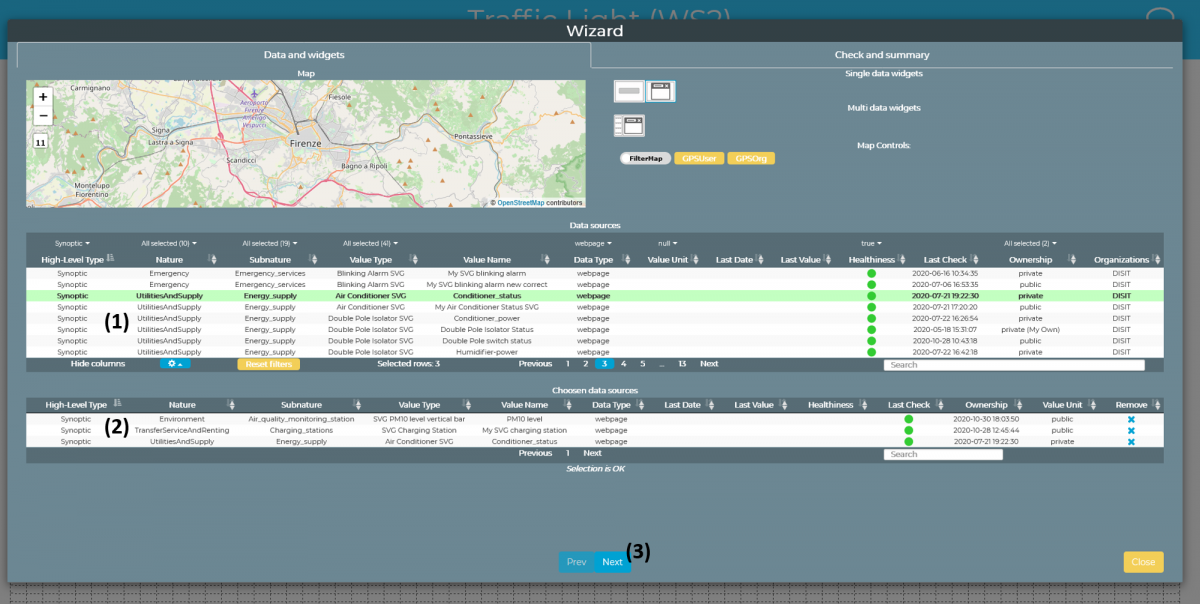 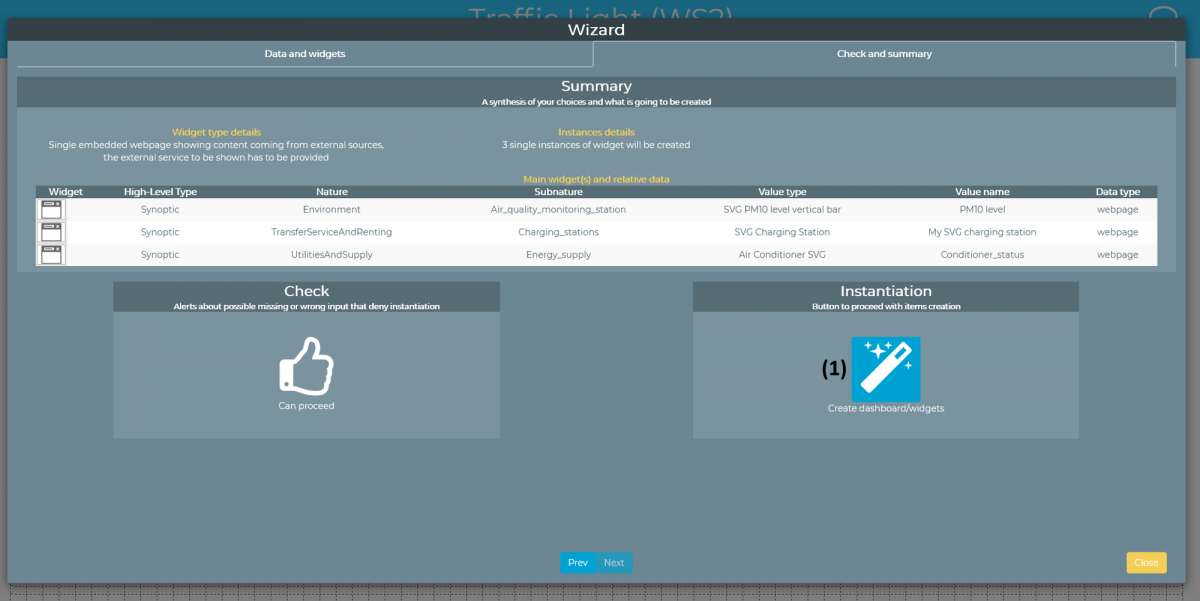 To speed up the process, synoptic' variables can be connected directly in read/write via specific Node-RED nodes of Snap4City for communicating with Synoptics.

To this aim, specific MicroServices (of the Snap4City library on official Node-RED Palette) have been implemented, as shown below:

In this case the Custom Widget Synoptics are connected with the WS Server that directly shortcut the reading with the writing and thus the loop is close in nearly real time, whitsout passing via an IOT App.

This modality has to be used only for the user interaction and has to be avoided in normal cases since it is specific for specific closed domains.

To implement this modality, during the widget instantion the list of the shared variables has to be set and connected to the custom widget variable.

In particular, during the widget instantion, below the list of all KPIs in the dropdown list it is possible to create a new shared variable to be associated to the template variable or connect a yet available shared variable.